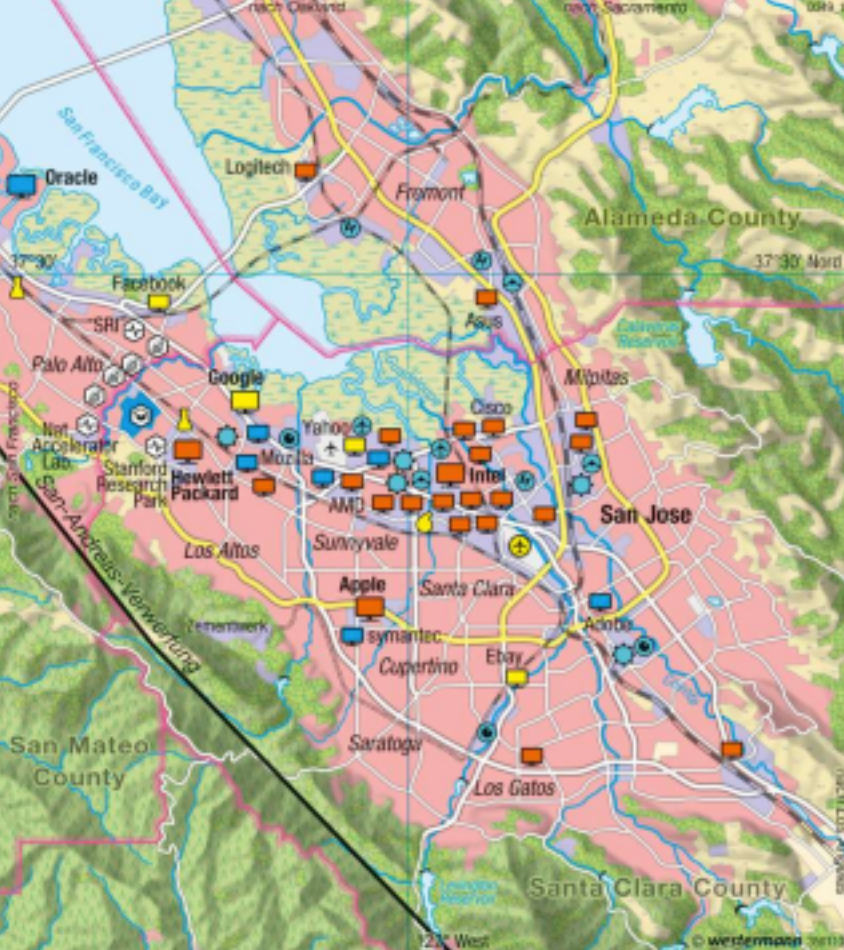 Silicon Valley, located in northern California, in the southern region of the San Francisco Bay area, is known as home to many of the world’s largest technology corporations and thousands of (mostly) technology-related startup companies. Some of the biggest technology-related companies in the world like Apple, Alphabet/Google and Meta (also known as Facebook), have their headquarters located in Silicon Valley. In this post we will take a look at its history, at the companies, and we’ll answer the question why Silicon Valley has a market cap of 8 trillion dollars in such a small radius and is the leading hub for high-tech innovation and development in the United States and the whole World.

To better understand why Silicon Valley is the leading hub for high tech innovation, we first have to look at its history.

First of all, many people are wondering what the origin of the Name Silicon Valley is. The word “Silicon”, which was first used in the early 1970s, refers to the region’s connection with the silicon transistors that are used for every present-day microprocessor for computers.

The Industrial Revolution of the 19th century had produced some very rich business people all around the world. One of these business people was Leland Stanford, who earned his fortune from the development of the railroad industry. He was the first “seed” for the history of the valley. Stanford's only son has traveled all around Europe to get a high-quality education. Unfortunately, he died at the age of 15 due to fever. In his son’s memory, in 1891 Stanford founded a university on a ranch he owned in the Santa Clara Valley, which was especially important in the valley’s early development.

An important person for Silicon Valley history was Frederick Terman, also called “The father of Silicon Valley”. He arrived at Stanford University in 1925, earned his first degree and started to teach a class in radio engineering. Although he spent the following decade building up the university’s “middle-class” electrical engineering program into a top-tier one, he also did something else. Terman encouraged Stanford’s graduates to stay in the valley and create local businesses, rather than heading somewhere else to search for work. This would build a long-continued industrial base in the valley.

The first company to do like Terman suggested was Hewlett-Packard (HP), founded in 1939 by Stanford’s graduates William Hewlett and David Packard. They started to make electrical test equipment in a rented one-car garage, with a starting capital of 538$. Seven of their devices were bought by their first customer, Disney, and were used in the making of the film Fantasia. After that, more graduates of Stanford University started to found their own aerospace and electronics companies in the region. Because of that, a network of companies has been entrenched. This was the first major step of Silicon Valley’s success.

William Shockley, a Nobel Prize winner for physics from 1956 for inventing the transistor*, established Shockley Semiconductor in Santa Clara Valley. He managed to attract 8 of the best graduates from around the country. However, the eight soon left to establish a rival start-up called Fairchild Semiconductors, creating a business that pushed the dominance for Silicon Valley in the technology sector.

While Fairchild Semiconductors grew rapidly, many employees left to launch their own businesses, including Intel. In a decade, 30+ other businesses have launched.

One of Fairchild’s ex-employees, Eugene Kleiner, formed “Kleiner Perkins”, a venture capital firm that invested in new, interesting startups. He decided to base his new company at the exit of a new highway, halfway between San Jose and San Francisco. The exit, called Sand Hill Road, today has the highest density of venture capital companies in the world. Kleiner Perkins went on to fund 800 companies, including Amazon, Google, Skype, Spotify and Electronic Arts.

Many people are wondering what the origin of the Name Silicon Valley is. The word “Silicon”, which was first used in the early 1970s, refers to the region’s connection with the silicon transistors that are used for every present-day microprocessor for computers.

At today’s level, Silicon Valley is home to around 40,000 start-up companies, 1,000 VC* (Venture Capital) Companies and some of the most recognizable tech companies in the world. We’ll have a look at the statistics of some of these.

The Company with the highest market cap in Silicon Valley, as well as in the whole world, is apple. Founded in 1976 in Silicon Valley by Steve Jobs, Apple reached a market cap of unbelievable $3 Trillion, on January 3, 2022. At the end of 2021, Apple's number of local employees was 25,000, placing second in the largest Silicon Valley employers, just after Alphabet/Google.

One of the fastest growing companies in Silicon Valley in 2021 was a digital health company called “Medable”. Founded by Dr. Longmire in 2015, Medable has written a software, which “enables patient generated data to drive clinical research, healthcare delivery, and personalized and predictive medicine”. Its software is currently used by over 15 U.S. top medical research centers. In 2021, the company reached a market cap of $2.1B. From 2020 until 2021, Medable has grown 300%.

Why market cap of 8 trillion dollars in 15 miles radius

Because we now know about the history of the Valley, we can understand better why it developed into the biggest high-tech innovation hub in the world. The biggest reason for the process of development of Silicon Valley was the very smart concept of Frederick Terman, to first educate graduates at a top-tier education program, then trying to stop the graduates from moving to another region and giving them advice to found their own start-up companies. This has built a network of companies that had something in common: they all had a connection to Stanford University. Therefore, new Stanford graduates that didn’t want to establish their own company, had no need to move out of the area, and could search for a job in the Valley. Just like that, local companies started to grow, employees had more money and started to establish their own start-ups. Additionally, bigger firms started to fund new, interesting start-ups. This cycle of events produced more and more companies, and the process repeated. Today, Silicon Valley is not only attractive to Stanford Graduates, but to many smart people all around the world.